Brianna Wilkins is Apprentice of the Month

Brianna Wilkins joined the University in November 2020 working as an Administration Apprentice for Student Registry . We are really pleased that Abingdon & Witney College have awarded Brianna the title of 'Apprentice of the Month' for October 2021. 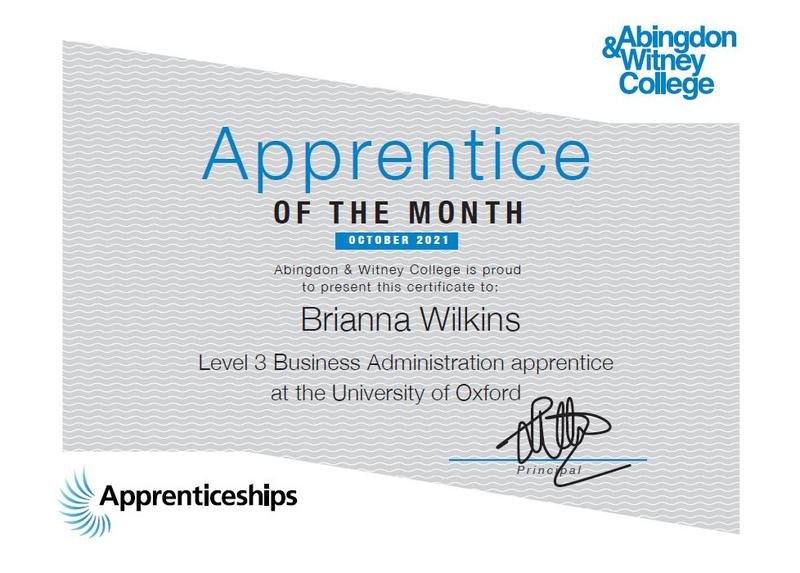 How you feel to have been given this title?

It was a really lovely surprise to be awarded Apprentice of the Month. It felt good to know that all my work had been recognised by the College and it felt even more special as I received the email on my one year work anniversary! I’d like to say thank you to everyone who has helped me during my apprenticeship.

Brianna's assessor nominated her for her hard work.

Brianna stands out for me for her integrity at work, commitment to others, to her team, and joy that she brings to all our sessions with her inquisitive mind and passion for learning.

Brianna has excelled in her performance at work and coursework, and in addition to always being proactive, punctual, ready to go extra mile in her learning and research,  Brianna has actively been mentoring peer apprentice, on weekly basis, and we can clearly see the impact of that support. Brianna continues to support others, despite her very challenging roamer role, and working on improvement project, she has recently taken on peer mentoring responsibilities for another apprentice. She does so with passion, integrity and commitment.

The level 3 business administration apprenticeship is one of the most popular programmes for apprentice roles at the University.

We work with Abingdon & Witney college to run this course for us.

Read all of our latest news stories

SEE ALL OF OUR LATEST NEWS