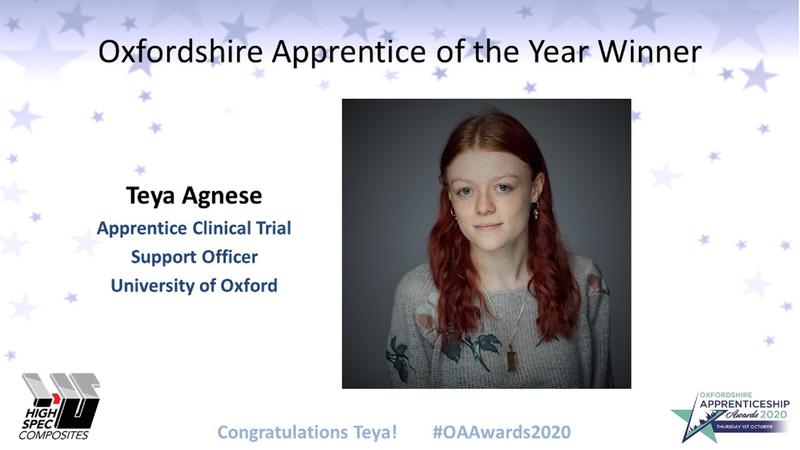 The sponsor of the overall Apprenticeship Award, High Spec Composites, chose Teya as the overall winner. They also said: "[Teya's] application really did stand out to us because she goes above and beyond in her role." They also mentioned the fact that Teya has designed and implemented her own blog which really helps to spread awareness and benefits of Apprenticeships to a wider audience.

We asked Teya how it felt to win both the intermediate award and then the Oxfordshire Apprentice of the Year award...

I felt over the moon to have won the Intermediate Apprentice of the Year, so when I kept watching and High Spec Composites announced at the end of the broadcast that I had also won Oxfordshire Apprentice of the Year too I was speechless… and (as my family and I were watching the broadcast of the awards ceremony in the kitchen) I leaped off of my chair and did a little celebratory dance with them. I feel so honoured to have made it this far in my apprenticeship, and I am truly grateful to have such a supportive team by my side

The Awards took place online, on Thursday 1 October and can be viewed on OxLEP's Youtube page.

You can also see a full breakdown of the award winners on the Oxfordshire Apprenticeships page.

Teya recently won the '2nd year Apprentice Award' at our own University of Oxford Apprenticeship Awards in March. See more about this on our blog post.