Over the last few years, the University of Oxford print studio have taken on two apprentices, who have both had a very positive impact on the team. The Apprenticeships team spoke to Bob Malloy (Print Studio Manger) to hear a bit more about these apprentices and their roles within the team. 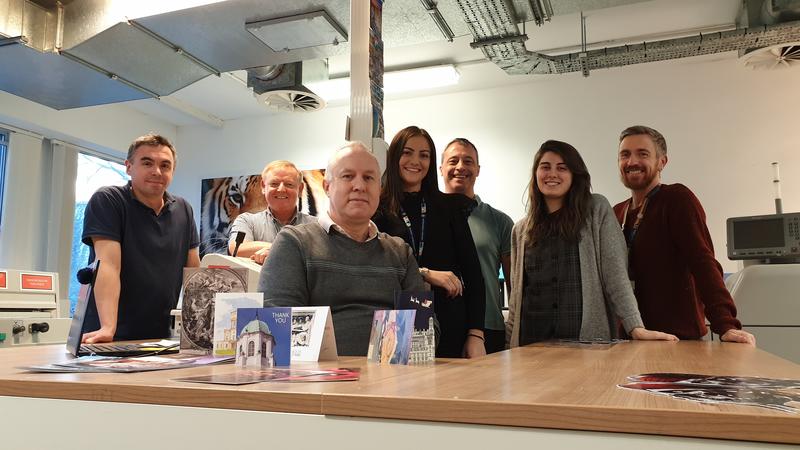 Who are the apprentices?

The print studio first hired Jordan back in 2016, just as the Apprenticeship scheme really got going. Bob says 'without the support of Sarah Warden this could never have happened, she was the driving force behind this and has been my apprenticeship advocate. She has also taken Jordan along to the school she works closely with and that has had a big part in Jordan’s development, inviting a group of pupils back in to work on a project with our designer, Andrew Connor, to raise money for the School.'

Benefits of having an apprentice

Bob explained that 'the benefit to the department is immeasurable. We had someone who was willing to learn new processes - during Jordan’s Apprenticeship I feel I got as much out of this as she did, to see a young person develop and grow made me very proud. The whole Team worked with Jordan and offered training and advice and she absorbed it all.

Imogen Taylor has worked with me for a year now and again the enthusiasm and commitment to her tasks is admirable, more than anything else this willingness to learn and develop any new ideas for the studio has benefited the Team.

One thing extra I will say is just because an Apprentice is not in my team does not mean I cannot admire what they achieve - I have seen Kya Gibbons in Mail Service develop herself and I see great things for her, she is a colleague I work with in Shared Services and hold in the highest regard.'

Hiring an Apprentice can offer the employer a chance to bring in new and innovative ideas. Apprentices are always willing to learn and develop their skills in order to grow and better themselves within the workplace. They can be a great asset to a team. - Imogen Taylor, Print Studio Business Apprentice

We also asked Bob about some of the apprentice's biggest achievements.

'Jordan Morris was Apprentice of the Year and she was Ambassador of the year as well which is a fantastic achievement. She was then employed into a full-time role during her Apprenticeship and passed with flying colours, but to see her mature into this wonderful person and colleague is my favourite part.

Imogen Taylor has been no less impressive. She came straight in and within a week was able to manage the office daily routine and schedule the work for the Team. I can tell you that the scheme she has been involved in launching for the Studio which is carbon balancing all of our paper usage has been top class and this will be something that will have a major bearing on our strategy for years to come.'

We asked Bob about the impact of his apprentices becoming ambassadors.

'When Jordan started I can remember Clive talking about the ambassador role, and I always said that my apprentices should give as much back to the scheme as they can and that they will get so much out of it. Jordan has thrown herself into this heart and soul and any impact with time needed to do this is very worthwhile and the confidence it brought out in her has paid dividends.

I have to say Imogen was really just getting started with this but stood up in front of a class of students and talked to them on her own. I can’t tell you how proud I was when she came back, hopefully she will get the chance to carry this on in the future.'

We also spoke to Imogen to get her thoughts on being an apprentice ambassador.

'I am an Apprentice Ambassador for both the University and OxLep which means I am part of a team that attends Schools, Colleges and other organisations to promote and provide information about apprenticeships to students and anybody else that may be interested. As a part of this I have attended many Schools and Colleges to talk about my Apprenticeship story and give them information about the scheme. Before I started my Apprenticeship I would have had no confidence to stand up and talk to an audience. This is also very rewarding as it feels like you are making a difference and helping young people with the first steps of their careers.'

This is an amazing scheme and it taps into a rich vein of talent that without it might be missed, we have been so lucky with our two Apprentices the group of people I have seen in interviews have been so talented and driven it was difficult as you want to employ them all, please give them a chance and enjoy the journey I have been fortunate to take.

Interested in finding out more about apprenticeship schemes at the University of Oxford? Head over to our website to find out more.

Read all of our latest news